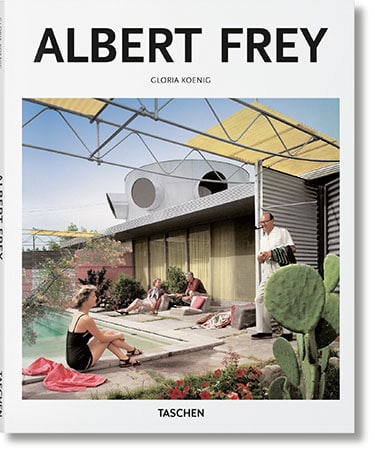 Architect Albert Frey (1903–1998) saw a modernist utopia in the desert. Born in Zurich, he studied in Europe with Le Corbusier before moving to the United States in 1930, convinced it was the land of architectural opportunity. On a visit to Palm Springs, he fell under the desert spell. It was here, amid the arid and empty landscape, that he could truly envisage a perfect modern future. Like fellow Californian luminary, John Lautner, Frey would spend the rest of his career nurturing the consonance of architecture and nature: studying the fall of sunlight and rain, and merging aluminum, steel, and glass with the boulders and sands of the West Coast wilds. His vision centered in particular on Palm Springs, capitalizing on the city’s postwar population boom to create a bastion of the sleek, leisurely modernism that defines midcentury California. In this dependable architect introduction, we follow Frey’s long and prestigious career from his European beginnings through to the apogee of his Californian practice, taking in his notes on De Stijl, Le Corbusier, and Bauhaus, and exploring the stylistic, material, and geographic makings of his unique “desert modernism.” The author Gloria Koenig is an architectural historian and author. She has published and lectured widely on a variety of topics in contemporary architecture, and served as consultant with filmmakers on a documentary about her late husband, modernist architect Pierre Koenig. The editor Peter Gössel runs an agency for museum and exhibition design. He has published TASCHEN monographs on Julius Shulman, R. M. Schindler, John Lautner, and Richard Neutra, as well as several titles in the Basic Architecture series.