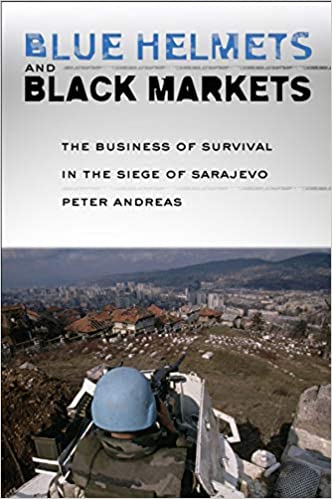 The 1992–1995 battle for Sarajevo was the longest siege in modern history. It was also the most internationalized, attracting a vast contingent of aid workers, UN soldiers, journalists, smugglers, and embargo-busters. The city took center stage under an intense global media spotlight, becoming the most visible face of post-Cold War conflict and humanitarian intervention. However, some critical activities took place backstage, away from the cameras, including extensive clandestine trading across the siege lines, theft and diversion of aid, and complicity in the black market by peacekeeping forces. In Blue Helmets and Black Markets, Peter Andreas traces the interaction between these formal front-stage and informal backstage activities, arguing that this created and sustained a criminalized war economy and prolonged the conflict in a manner that served various interests on all sides. Although the vast majority of Sarajevans struggled for daily survival and lived in a state of terror, the siege was highly rewarding for some key local and international players. This situation also left a powerful legacy for postwar reconstruction: new elites emerged via war profiteering and an illicit economy flourished partly based on the smuggling networks built up during wartime. Andreas shows how and why the internationalization of the siege changed the repertoires of siege-craft and siege defenses and altered the strategic calculations of both the besiegers and the besieged. The Sarajevo experience dramatically illustrates that just as changes in weapons technologies transformed siege warfare through the ages, so too has the arrival of CNN, NGOs, satellite phones, UN peacekeepers, and aid convoys. Drawing on interviews, reportage, diaries, memoirs, and other sources, Andreas documents the business of survival in wartime Sarajevo and the limits, contradictions, and unintended consequences of international intervention. Concluding with a comparison of the battle for Sarajevo with the sieges of Leningrad, Grozny, and Srebrenica, and, more recently, Falluja, Blue Helmets and Black Markets is a major contribution to our understanding of contemporary urban warfare, war economies, and the political repercussions of humanitarian action.