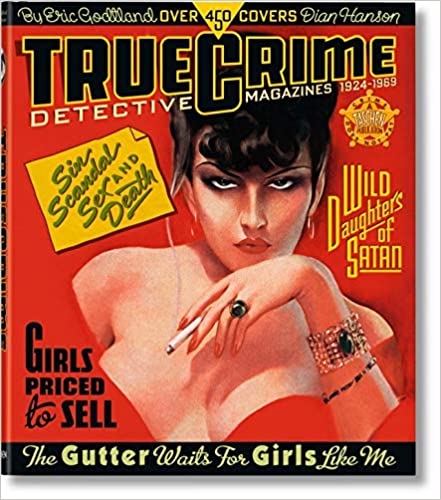 The Golden Age of bad girlsGun-toting femme fatales caught in the action!Follows the evolution and devolution of this distinctly American genre from 1924 to 1969At the height of the Jazz Age, when Prohibition was turning ordinary citizens into criminals and ordinary criminals into celebrities, America’s true crime detective magazines were born. True Detective came first in 1924, and by 1934, when the Great Depression had produced colorful outlaws like Machine Gun Kelly, Bonnie and Clyde, Baby Face Nelson, and John Dillinger, the magazines were so popular cops and robbers alike vied to see themselves on the pages. Even FBI boss J. Edgar Hoover wrote regularly for what came to be called the “Dickbooks,” referring to a popular slang term for the police.As the decades rolled on, the magazines went through a curious metamorphosis, however.When liquor was once more legal, the Depression over and all the flashy criminals dead or imprisoned, the “detectives” turned to sin to make sales. Sexy bad girls in tight sweaters, slit skirts and stiletto heels adorned every cover. Coverlines shouted “I Was a Girl Burglar—For Kicks,””Sex Habits of Women Killers,” “Bride of Sin!,””She Played Me for a Sucker,” and most succinctly,”Bad Woman.”True Crime Detective Magazines follows the evolution and devolution of this distinctly American genre from 1924 to 1969. Hundreds of covers and interior images from dozens of magazine titles tell the story, not just of the “detectives,” but also of America’s attitudes towards sex, sin, crime and punishment over five decades. With texts by magazine collector Eric Godtland, George Hagenaur and True Detective editor Marc Gerald, True Crime Detective Magazines is an informative and entertaining look at one of the strangest publishing niches of all time.“My buddies wanted to be firemen, farmers or policemen, something like that. Not me, I just wanted to steal people’s money!”– JOHN DILLINGERAbout the editor: Dian Hanson is TASCHEN’s sexy book editor. As a 25-year veteran of men’s magazine publishing, she edited titles including Puritan, OUI, Outlaw Biker, Juggs, and Leg Show. Her many books for TASCHEN include The Big Book of Breasts and The Big Penis Book.About the author: Eric Godtland is a self-confessed compulsive collector.Working from his bases in the Haight-Ashbury and Potrero Hill districts of San Francisco, Eric obsesses over all things girlie, Hawaiian, musical and modernist. Originally from Butte, Montana and Coronado, California, Eric traces his interest in mid-century magazine design to the colorful pasts of both of these character-rich towns, where the past over-stayed its welcome.