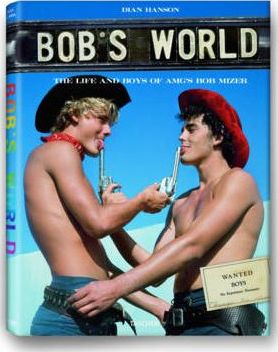 The boys and backdrops of Bob’s Kingdom Bob Mizer’s fabulous late-period full-color homoerotica Bob Mizer spent 48 years making photos and films for his Athletic Model Guild, and 41 years publishing Physique Pictorial, America’s first, and most explicitly gay physique magazine. His diaries, kept from the age of eight, make it clear that he was openly homosexual from his late teens, but until the age of 42 he lived and worked in his mother’s L.A. rooming house, where his strict ethical code prevented him from fully expressing his fantasies. For 24 years he worked in black and white and never showed a completely naked man, but following his mother’s death in 1964 Mizer built a kingdom dedicated to the pleasures of male flesh, and photographed fully nude men in explicit poses and psychedelically saturated colors. In the 1970s and ’80s Bob Mizer’s compound, centered around the old rooming house, became home to dozens of his young models, who lived outdoors on couches and porch gliders among the chickens, geese, goats and monkeys, Roman statuary, cast off Christmas trees and other sundry props that featured in his increasingly quirky films and photography. Sometimes called the Hugh Hefner of gay publishing for his pioneering magazine (republished in entirety by TASCHEN in 1997), Mizer influenced figures in art and society from David Hockney–who first came to America partly to meet Bob Mizer–to California governor Arnold Schwarzenegger, who modeled for Mizer in 1975. Bob’s World: The Life and Boys of AMG’s Bob Mizer is the first book to celebrate the full-color, deliriously uninhibited carnival of late-period Mizer. Over 250 photos are accompanied by an oral history by contributing artists David Hockney, Jack Pierson and John Sonsini, photographers David Hurles and Hal Roth, models Ben Sorensen and Andrew Sears, and Wayne Stanley, inheritor of the Mizer estate. The book includes a one-hour DVD of Mizer films spanning 1958–1980, specially edited for this edition. About the editor and author: Dian Hanson was born in Seattle in 1951. She has been TASCHEN’s sexy book editor since 2001. Prior to that she worked for 25 years producing various men’s magazines. Her many books for TASCHEN include The Complete Kake Comics, The Big Book of Breasts, and The Big Penis Book. She lives in Los Angeles.